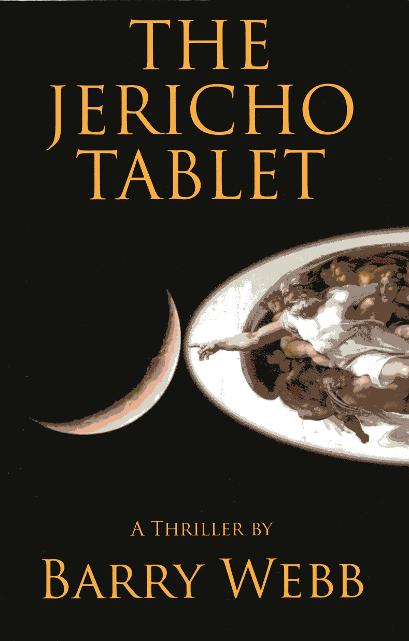 What if an ancient tablet was discovered that undermined the foundations of both Christianity and Islam while giving instructions for re-awakening an older god, a god who exacts frightful revenge while promising a utopia of eternal life, peace, and vast knowledge--in turn for absolute devotion and loss of free will?

What if that "god" was an artifact buried just under the surface of the moon supposedly by an ancient space-faring race?  What if the president of the United States had a Messiah complex and staged his own "assassination" and "resurrection" three days later in order to become the "son" of that new/old "god" on the moon?

Is this the rapture the Evangelicals have been praying for?

Is this the new heaven and the new earth prophesied in both the Bible and the Qur'an?

Or, is it the anti-Christ?  The Beast of Revelation?

Is it the great blaspheme?  The abomination that maketh desolate?

Or is it something else even more sinister?

Matt Nolan and his colleagues in the U.S. Intelligence services have only a limited amount of time to uncover the secrets of the resurrected artifact and find a means for destroying it and corralling the president--before they themselves are destroyed.

What if a cabal of secret adherents of the ancient moon god cult were embedded in Christianity and Islam?  And what if they have managed to pass on their beliefs through the centuries to their descendants in the present day?

What if that cabal included the president of the United States, the Pope, and the Russian hierarchy, and they decided to follow the instructions in the tablet and "resurrect" the god?

What if that resurrected "god" then began eating the moon--with threats that the planet earth and all life on it will be next?

The wild card in all of this is a secret terrorist group called the Ansar al-Kitab which at first thwarts the efforts of Matt and his colleagues, then becomes part of the solution.

For more information about the book, and about the author, please visit the author's website:  www.barrywebbauthor.com

THE JERICHO TABLET is now available on Nook www.barnesandnoble.com and Kindle.  The glossy trade paperback edition is available through www.Amazon.com.

WHAT THE REVIEWERS ARE SAYING:

This thriller has movie written all over it. An ancient tablet is discovered that undercuts the foundations of both Christianity and Islam. That in itself is a gripping and original idea: imagine such a discovery in today's world, which in fact is the story's setting. But there's more. The tablet gives instructions for reawakening an older, vengeful god, who offers all humanity a kind of Faustian bargain: live forever, in peace, enjoying vast knowledge--but only in return for unquestioning devotion and surrender of free will. It's possible to imagine such a thing's happening; it doesn't sound like something beyond the realm of archaeology or related fields of scholarship. This "god" is an artifact buried on the moon by ancient space travelers.

The President of the United States sees himself as a messiah; stages his own fake assassination and, three days later, his resurrection, in order to emerge as the supposed "son" of this newfound "god" on the moon.   Protagonist Matt Nolan and his US intelligence services cohorts have little time in which to find out the secrets of the god/artifact, figure out how to destroy it and find a way to rein in the wildly out-of-control president, with their own survival at stake.  The Jericho Tablet does what a thriller is supposed to do, which in my view is: (1) keep you up all night reading, and then (2) keep you trying to mind-cast the movie.

The author's bio states that he has Master's degrees in Ancient History and Near Eastern Studies; worked many years as an Arabic analyst/translator for, among others, NSA; and has lived, worked and studied in the Middle East. Thus he would seem to be exceptionally well-qualified to write this story.

The Jericho Tablet is a fast-paced novel that is a genuine page-turner. The author uses his extensive background in archaeology, languages, Middle East cultures, and the NSA to tell a contemporary (although set in 2020) and original story that both entertains and educates. The Jericho Tablet is filled with believable characters and incidents in the USA, Russia, and the Middle East. The ending both surprised and worked for me. The author also deftly interweaves simultaneous events taking place in different locales. The Jericho Tablet has all the ingredients to make a great film.

Government conspiracies, religious fanatics, ancient myths, global intrigue and science fiction spice this thriller. Barry Webb has used his knowledge of ancient history, near eastern culture and US government agencies to write a fast-moving story that is peopled with believable characters. I was caught up immediately and stayed captive until the end. Recommended reading!

Fran Marian, author of Carved in Stone and The Rug Broker

“This is one Exciting Read.  The Jericho Tablet is a thriller that has many parallels and similarities between our present world and what could very well happen in the future. Rich in history and understanding of the Middle Eastern mind renders this work extremely educational as well.  I learned a lot. The tempo never slackens and the author’s masterful ability to switch scenes on a global stage while retaining plot continuity at a heated pace keeps the reader wanting more.  Like a proverbial “literary box of chocolates,” after one or two chapters of this page-turner, I can assure you that you’ll be hooked!”